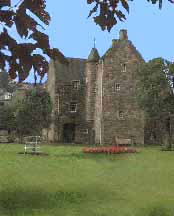 A short walk away from the 12th century Abbey and situated in a garden of pear trees, this house was visited by Mary in October 1566. She had come to the Borders via Traquair House to preside at local courts and stayed for four weeks, most of the time spent recovering from her arduous ride to visit her future lover, the Earl of Bothwell at Hermitage Castle.

In fact she was so exhausted that she caught a fever and nearly died from it. Later on, when held in captivity by Elizabeth I of England, she said, "Would that I had died in Jedburgh..."

The rooms in Mary Queen of Scots House contain tapestries, oil paintings, furniture, arms and armour and some of Mary's possessions, arranged in narrative sections:

One of Scotlands top visitor attractions, nowhere else is the story of Mary, Queen of Scots told and interpreted so fully. Many visitors say they have been left with a profound impression of her life and the times in which she lived, and deeply touched by it.

Other Mary Queen of Scots pages: